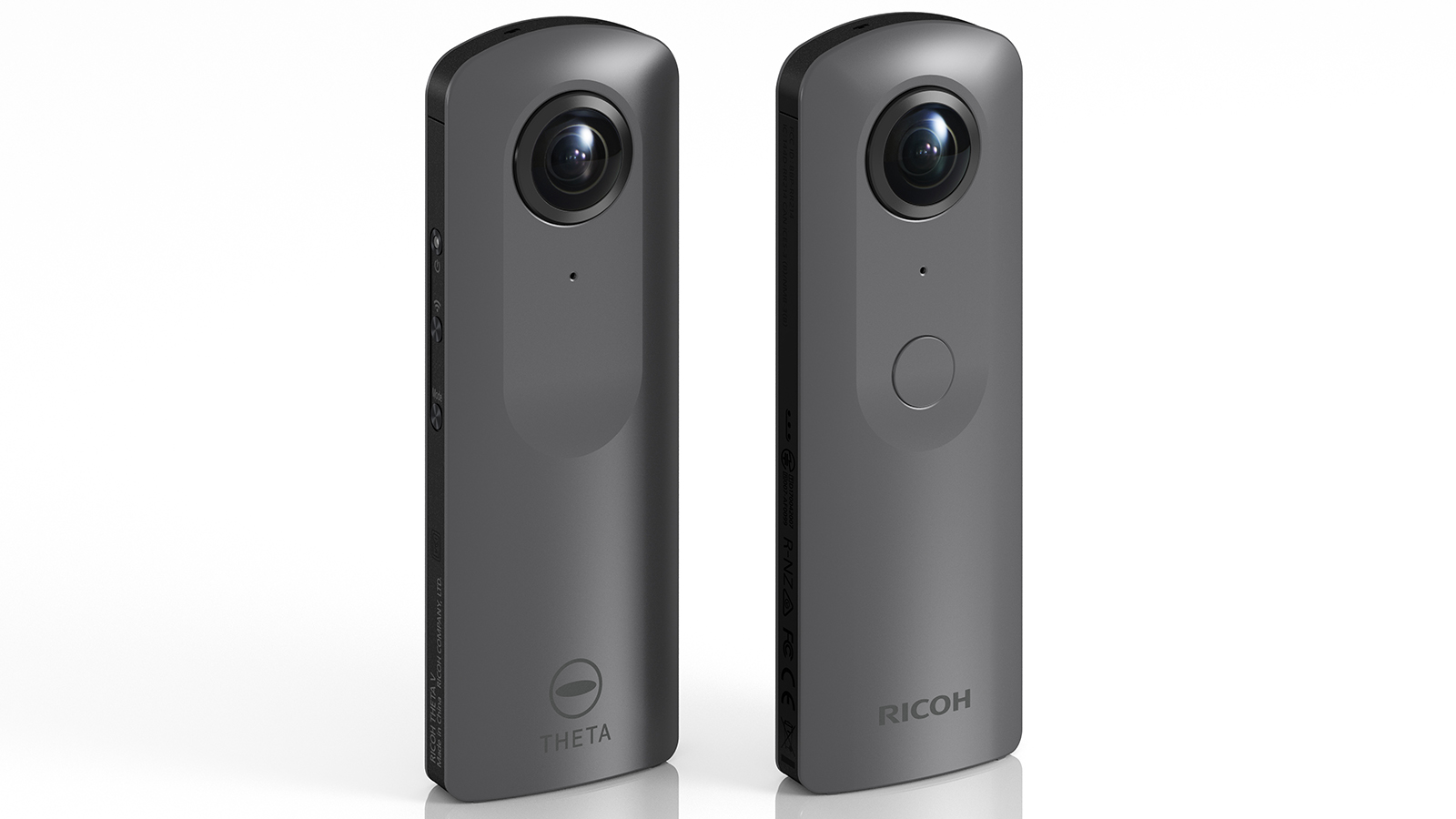 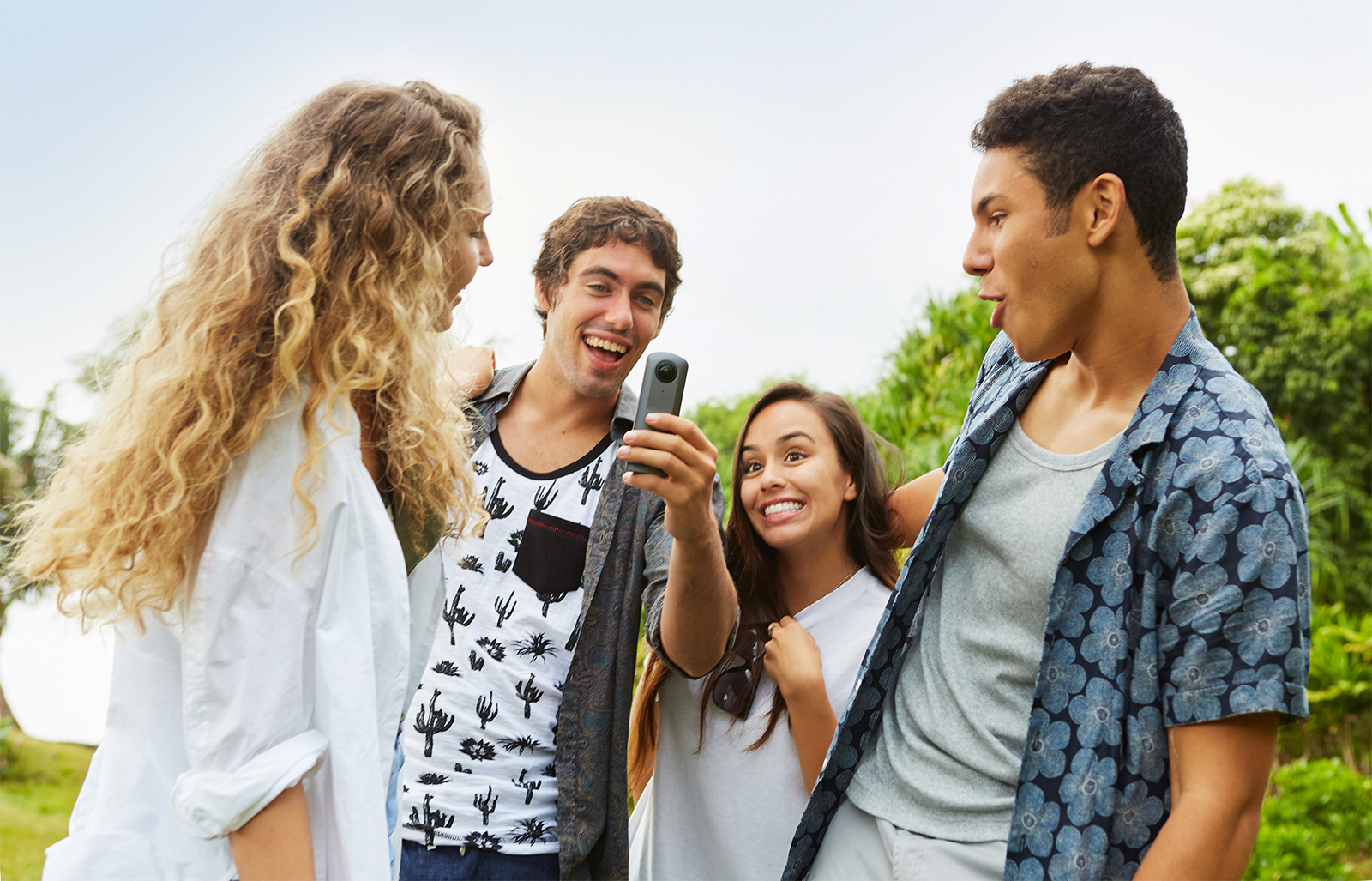 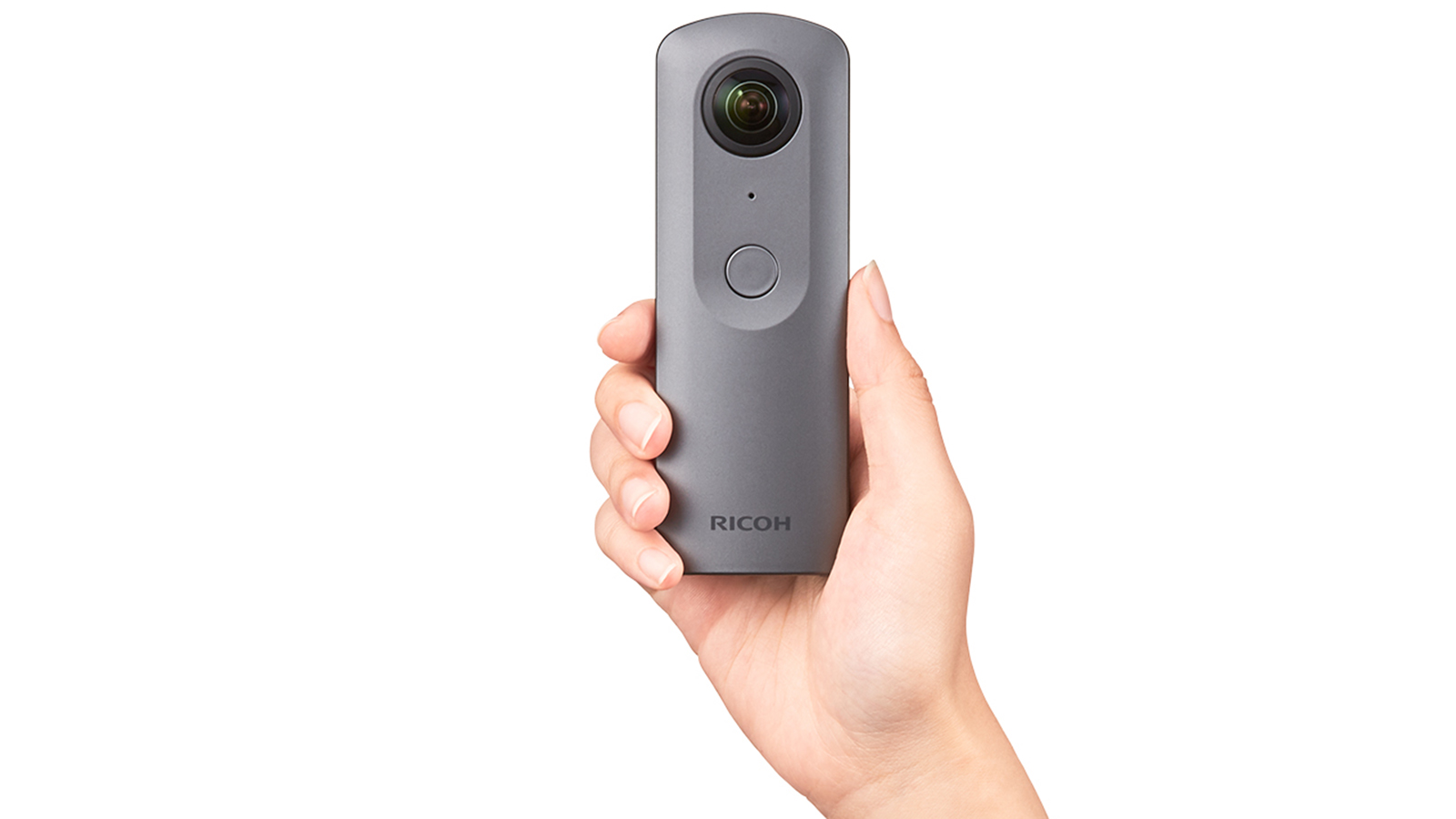 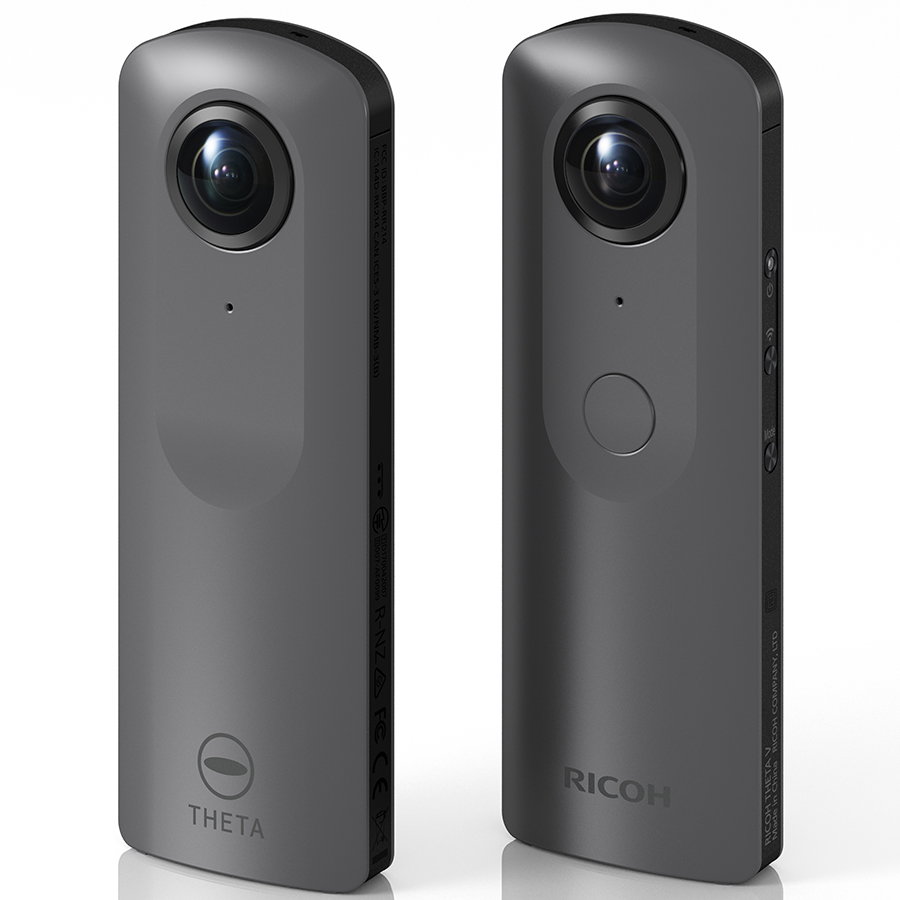 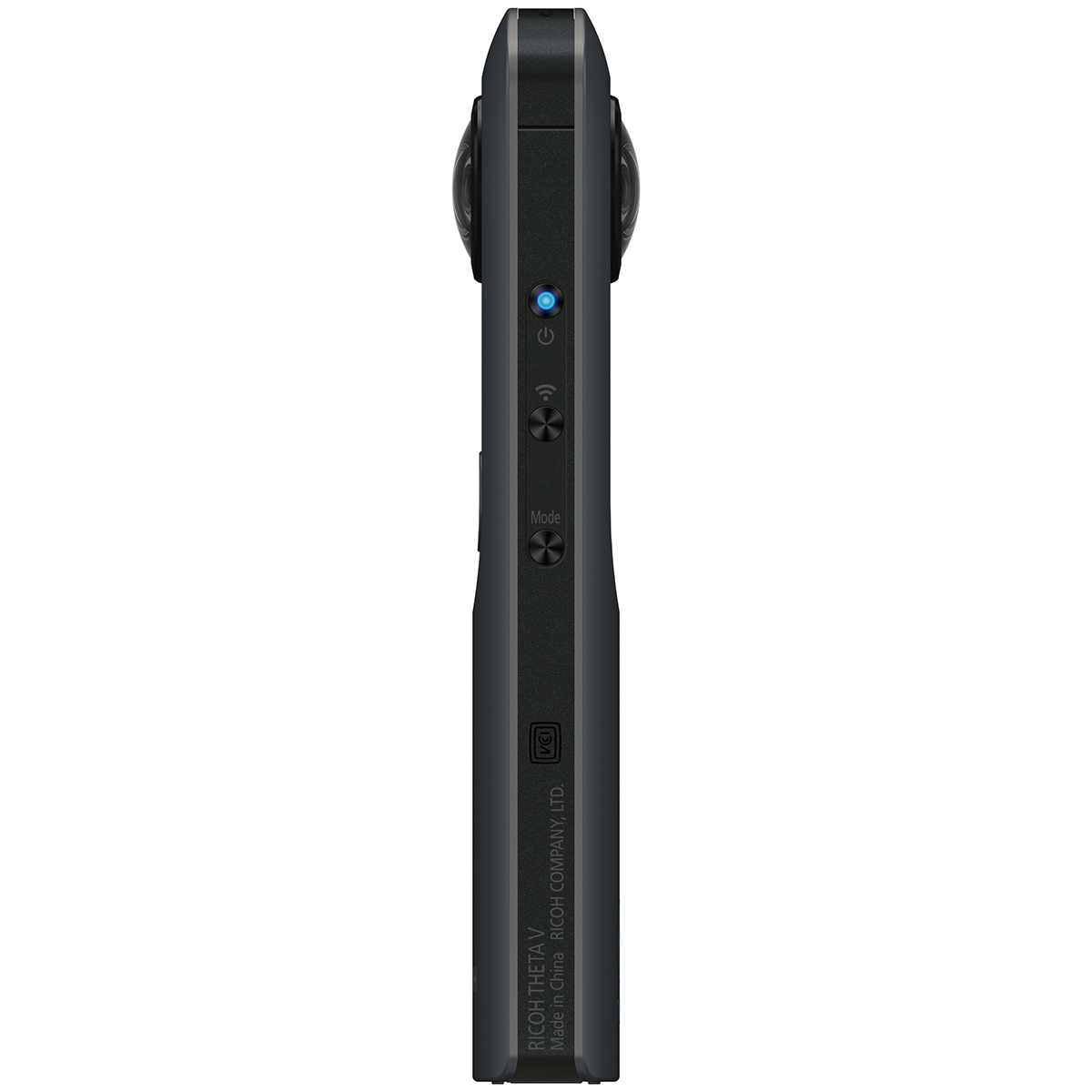 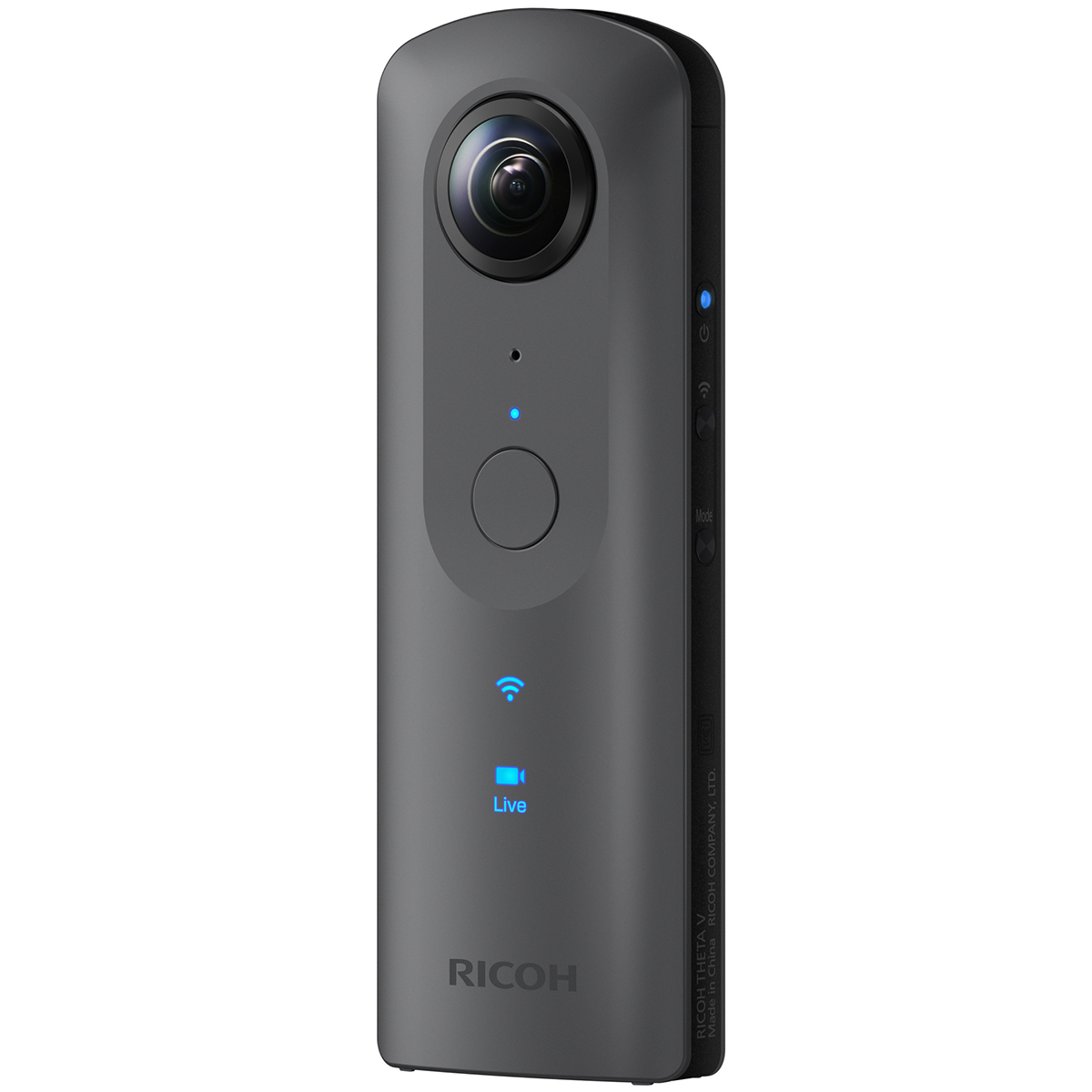 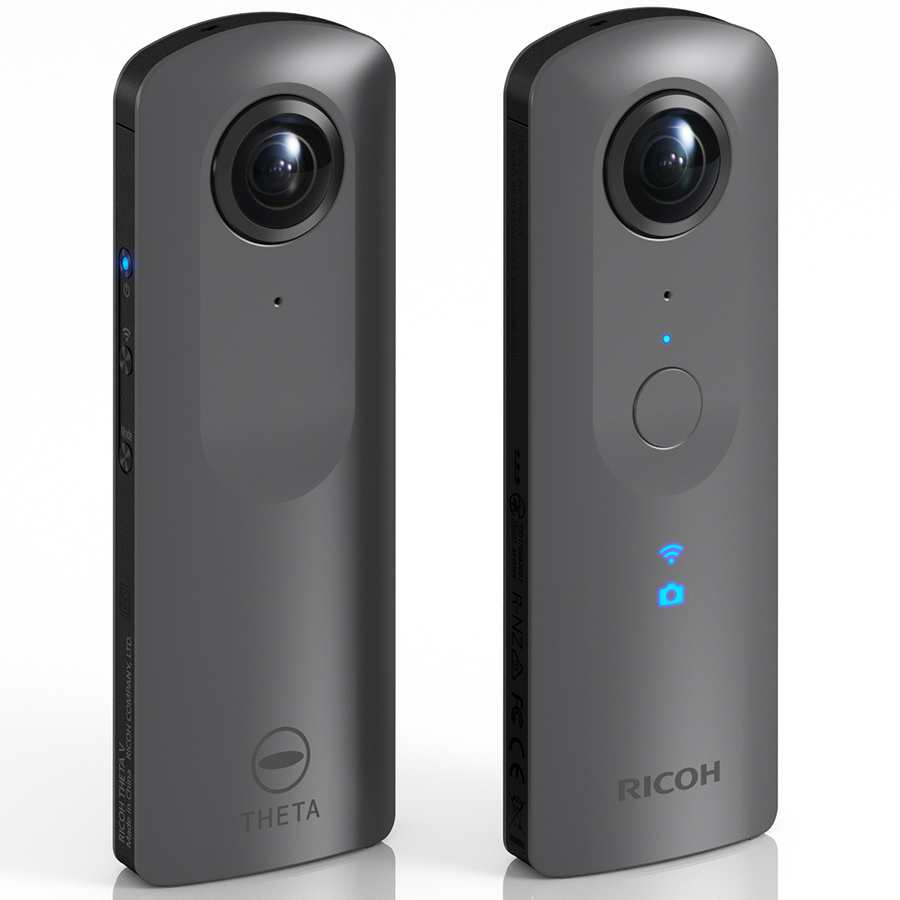 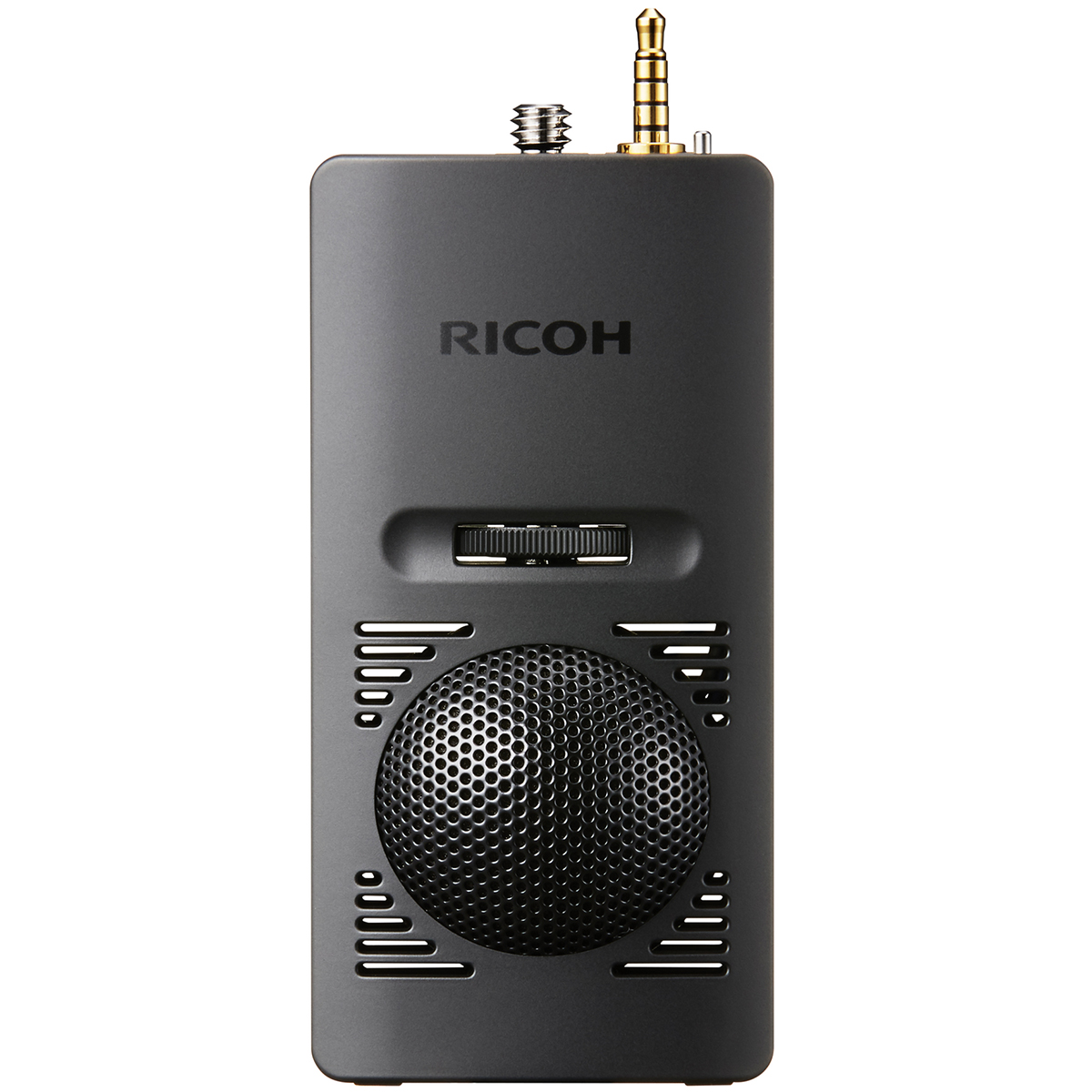 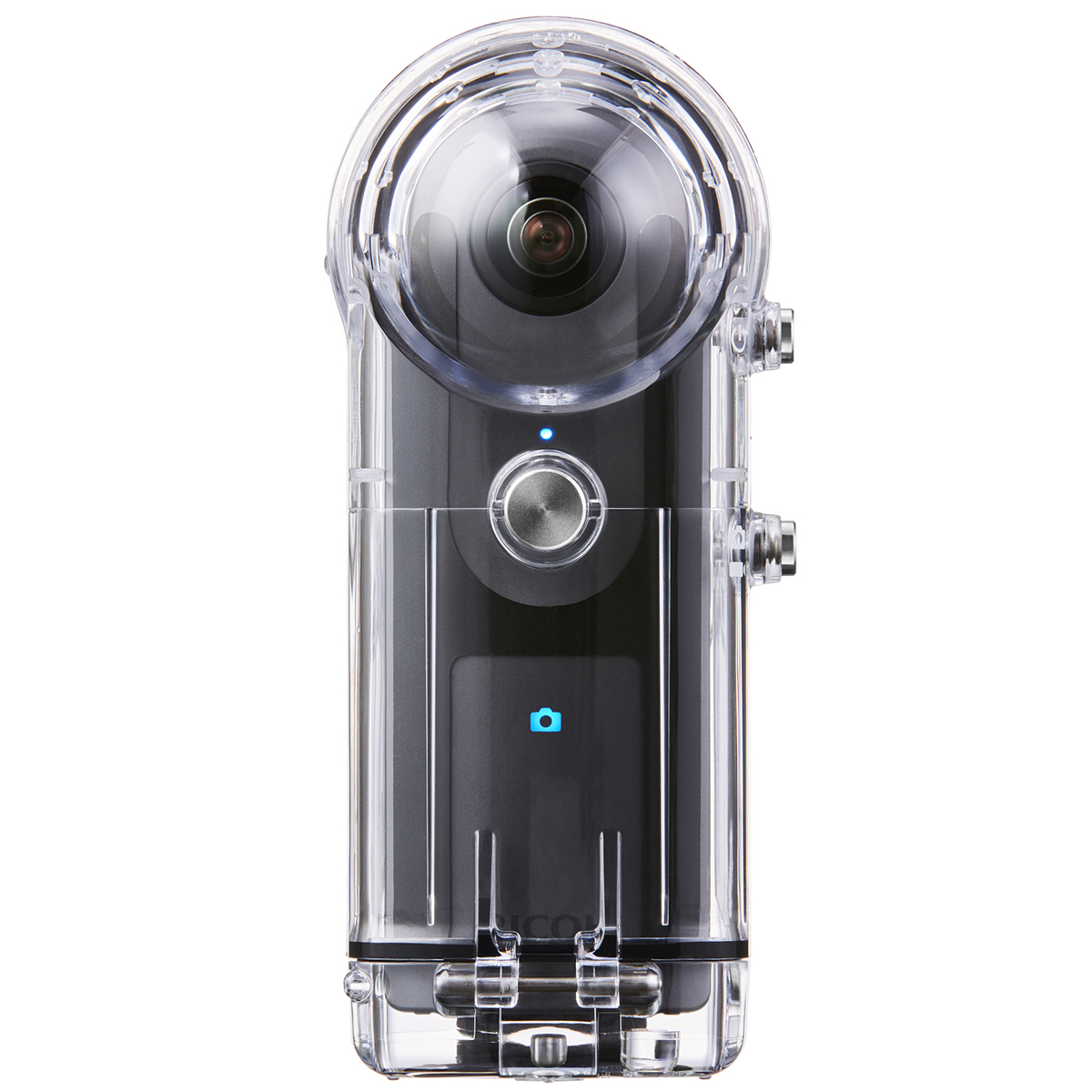 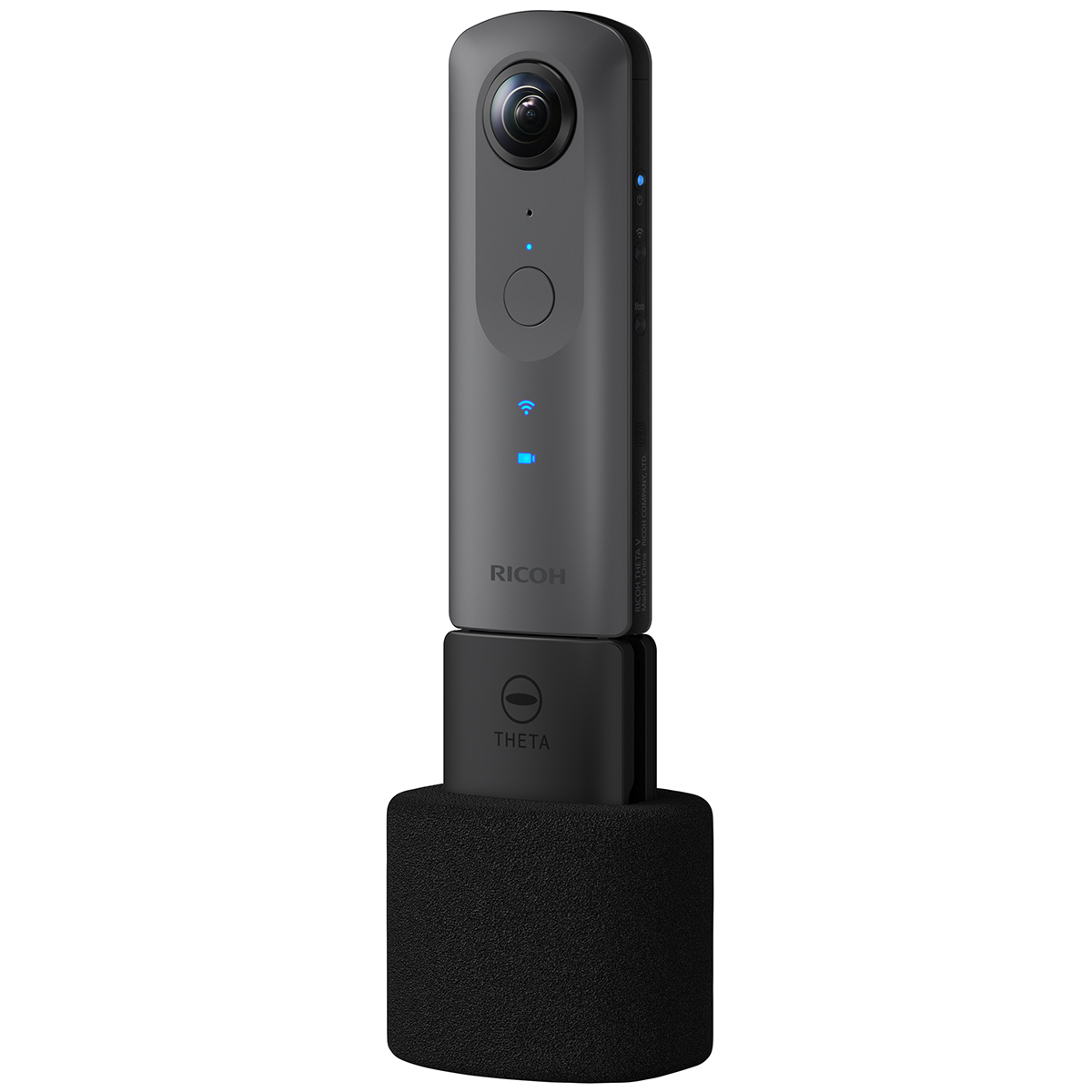 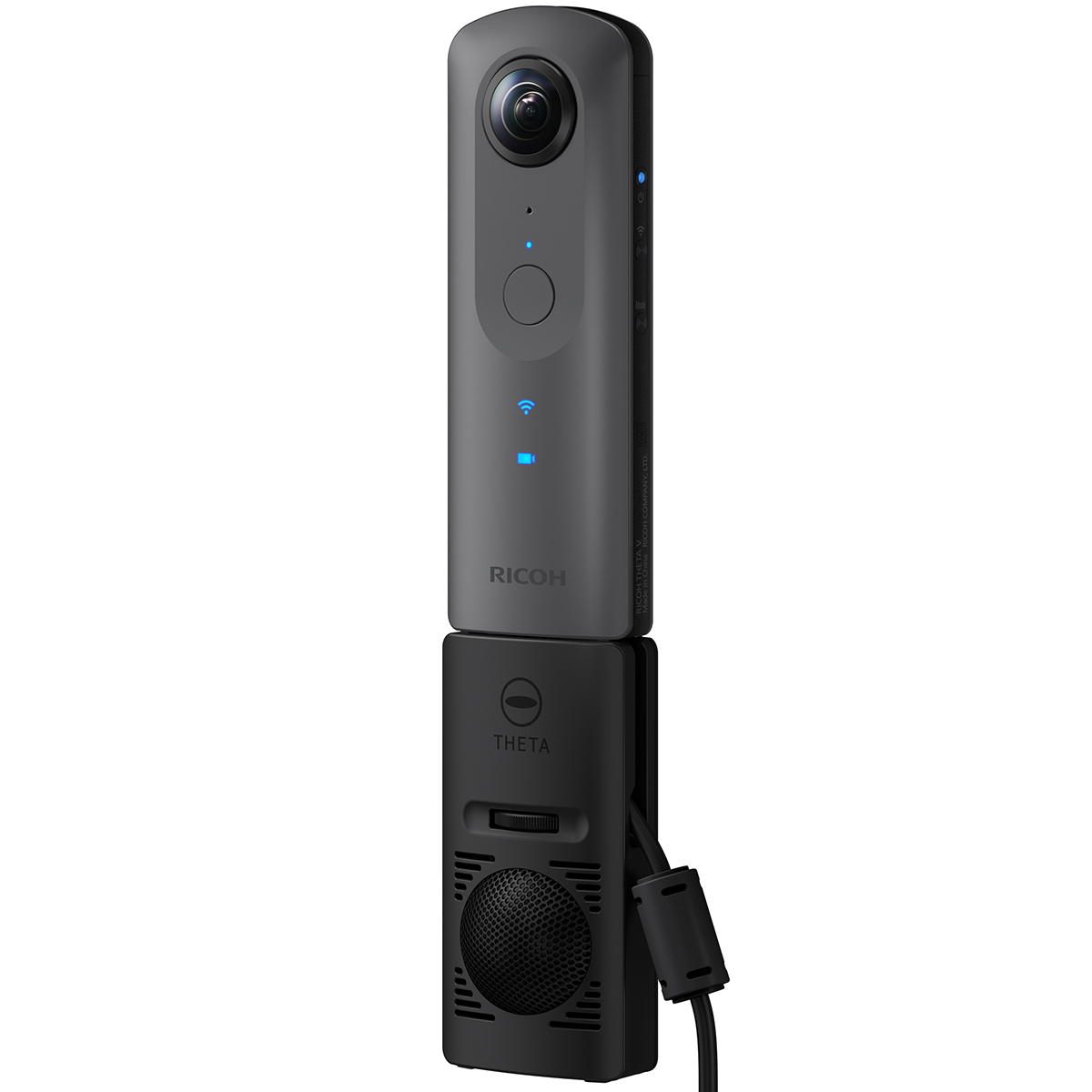 TOKYO, August 31, 2017 — RICOH COMPANY, LTD and RICOH IMAGING COMPANY, LTD. announced today the launch of the “RICOH THETA V”, which supports features that include 360-degree 4K video capture, immersive spatial audio recording, and high-speed transfer as a high-end model of the 360-degree “RICOH THETA” camera series. Since the RICOH THETA was first launched on the market in 2013 as the world’s first 360-degree single shot camera*1, it has been used in a variety of visual fields as an exceptional imaging tool, with fully spherical images creating unique, completely unexpected visual expression. This 360-degree visual space, which exceeds the conventional concepts of photography, referred to as shooting composition enables people to capture images of 360-degree atmosphere with them in the shot so that others can experience the same atmosphere later in the future and also family and friends who are far away can experience it as though they were actually with the person in that place. Furthermore, due to the rapid growth of the virtual reality (VR) market, the expansion of SNS that support 360-degree image, and the increase in the need for 360-degree image in the business market, the demand for 360-degree spherical image represented by THETA is expected to expand further in the near future. The “RICOH THETA V” to be launched is a product with a body based on the concept of being compact, lightweight and easy to carry around anywhere. Furthermore, it achieves high-speed transfer that can comfortably browse large volumes of data, high sound quality recording compatible with 360° spatial audio, and shoot equivalent 360-degree 4K video. The camera can also connect to a smartphone or tablet using either Bluetooth or wireless LAN to allow for flexible operation based on how the camera owner uses it. In addition, this product has a highly expandable body design so that it can receive future performance enhancements through firmware updates after it has launched, which results in a fitting high-end model camera. This product will also be introduced at “IFA 2017”, the world’s largest consumer electronics show, held in Berlin, Germany from September 1, 2017. *1. As a mass-produced consumer product capable of capturing the scene around, above and below the device in a fully spherical image (as of October, 2013, based on Ricoh research).

The RICOH THETA V will be available at the end of September at a Recommended Retail Price of €449,-.

Both  the image quality of still images and video have been significantly improved and power consumption has been reduced by adopting a new image sensor that supports high-speed shot image data readout and the Qualcomm® Connected Camera Platform with a Qualcomm® Snapdragon™ processor. Furthermore, we have completely changed the exposure accuracy and white balance algorithm by combining image processing technology cultivated through the development of high performance cameras that include Ricoh’s digital SLR camera and GR. We have also performed tuning to obtain accurate and natural portrayal of high-definition 360-degree spherical images with an approximately 14.0 effective megapixel output for still images even when using auto shoot.

Users can directly post 360-degree spherical images shot using the camera to Facebook and LINE, or upload them to the theta360.com dedicated website and share them on social networks such as Twitter and Tumblr. Unique cropped image can also be shared with Instagram. It is also possible to submit captured spherical images or videos to YouTubeTM 360-degree channel and Google MapsTM.

The camera can shoot high-definition smooth 360-degree video at 30 frames per second at a resolution of 3840 x 1920 pixels, which is equivalent to 4K. Users can enjoy greater realism by creating immersive VR video content and watching video on a large screen. In addition to supporting the H.264 file format for video recording, the more recent video compression standard of H.265*2 is also supported.

*2. The dedicated app only supports H.264. H.265 is a specification supported in anticipation of future applications based on the API release.

The camera has a 4-channel microphone that supports 360-degree spatial audio recording built into its body. Recording omnidirectional audio including, not just in the horizontal direction but also in the vertical direction, makes it possible to reproduce sound and video as it was in the environment where the video was shot by linking 360-degree video and audio together. Furthermore, using the dedicated accessory “3D Microphone TA-1” (optional)*3 scheduled for launch at the same time will allow users to pick up natural sound with a large volume of information at low to high frequency.

*3. “3D Microphone TA-1” is equipped with a microphone unit developed by Audio-Technica Corporation.

The communication speed is now up to around 2.5 times faster*4 than conventional models, which was achieved by improving the wireless communication module and increasing the data processing speed. Large volume of image data that accompanies the change to higher resolutions can also be comfortably transferred and browsed.

*4. Actual  value when compared to “RICOH THETA S” using data of the same size. Based on Ricoh testing.

5. The World’s-first*5, “Remote Playback” to enjoy 360-degree image on a large screen monitor

“Remote Playback” for 360-degree video is installed as a plug-in. Using a general-purpose receiver equipment*6 such as a compatible wireless display adapters it is possible to mirror playback of 360-degree still images and video data stored on the camera. This allows users to enjoy powerful 360-degree video on large displays or over projectors by operating the camera.

*5. As a commercially marketed, fully spherical camera. Based on RICOH research.

*6. Please check the Ricoh website for equipment that have been confirmed to operate with this feature.

The camera can always be connected to a smartphone using Bluetooth low energy. Image can be shot from a smartphone while connected only using Bluetooth low energy, and the power of the camera can be turned on from the basic application when it enters sleep mode. This function provides improvements in usability. With wireless LAN connection, all functions such as live-view display on a smartphone and image transfer can be used. User can select either Bluetooth or wireless LAN connection as needed depending on the shooting scene.

7. Functions can be added using plug-ins

Using the Android base operating system achieves excellent extensibility with a high degree of freedom. Adopting various plug-ins such as “external memory recording” that are under development, including the newly added “Remote Playback” feature, means that it is possible in the near future to use the camera in a variety of ways such as being able to switch over and use a variety of expanded functions from a smartphone application. An environment that can add and use plug-ins released by general developers is also planned for the future.

The camera has high extensibility that enables regular performance enhancements using firmware updates for the application.

[Update functions currently being developed and scheduled for release in 2017]

is supported. It is possible to share the atmosphere as though you are actually at the shooting location by viewing live streamed*7 360-degree spherical image over the Internet.

*7. Requires a computer with high performance image processing and a high speed communication environment to transmit.

“Qualcomm Technologies is empowering a comprehensive 360/VR ecosystem from our connected camera platforms to VR HMDs, aiming to allow manufacturers to deliver solutions for content creation, communication, and consumption,” said Raj Talluri, Senior Vice President, Product Management, Qualcomm Technologies, Inc. “With the launch of the RICOH THETA V 360 camera, built on the Qualcomm Connected Camera Platform, we are very excited to bring superior connectivity and powerful compute capabilities to the 360 camera industry which we believe will be an important content generator for VR.”

“The Ricoh Theta V is the first Street View mobile ready camera to be certified by Google. This distinction means that Theta V owners will be the first to experience the all-new auto mode which allows you to create Street View imagery while you walk, bike or even drive – a huge improvement over having to photograph and connect individual 360 photos.” Says Charles Armstrong, product manager for Google Street View: “The Ricoh Theta line of 360 cameras have consistently set the bar for combining quality, convenience, and affordability in a single product. We’re excited to offer our avid contributor community such a powerful new option for Street View authoring.” In addition to the new Theta V certification, Ricoh’s existing Theta S and SC cameras have also gained new distinction: the Theta S and SC have now been certified as Street View workflow ready for their abilities to shoot individual 360 photos and publish them to Street View.” 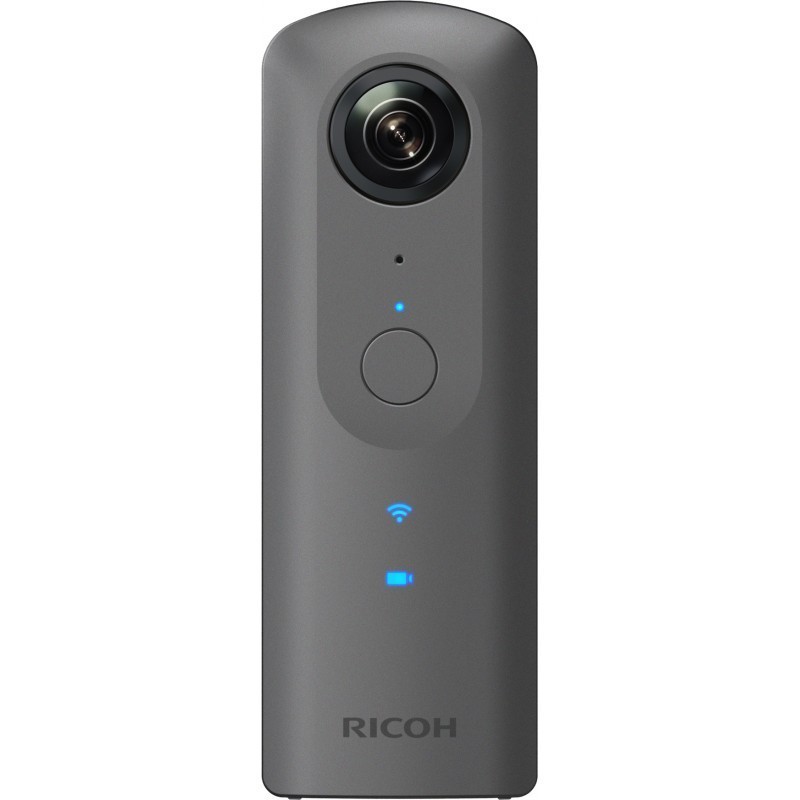